Everything we know so far

Note that most of the information contained below is derived from various leaks. These leaks come from sources who have had a good track record, but we still suggest you take the information provided below with a grain of salt.

The face of the Nothing phone (1) is actually the back panel, which contains a new semi-transparent design with five lighting strips called the Glyph interface that can be used for various use-cases like an evolved notification LED. This was revealed in a video where YouTube MKBHD showed the full Nothing phone (1). The Glyph interface is capable of alerting users of notifications, calls, charging and more. You can read more about the functionality and working of the Glyph Interface in our full guide.

Snapdragon 778G+ and other specifications

Nothing is yet to confirm most of the specifications of the phone, but a number of leaks and certifications have now hinted at some key internal components of the phone. These include the Snapdragon 778G+ chipset, a 6.55-inch 120Hz AMOLED display and a 4,500mAh battery with support for 45W wired charging and unspecified wireless charging.

8+128GB $397
If this pricing is legit then it will be available in India around ₹26-28K with offers.
Via:https://t.co/NzXwlkLQ3P pic.twitter.com/HvuUeV4Ic4

The phone is also expected to be launched in three storage variants. These include an 8GB/128GB variant, an 8GB/256GB variant and a top-end 12GB/256GB variant. The dual-camera setup on the back is expected to comprise a 50MP main camera and a 16MP ultrawide camera long with a second 16MP sensor on the front for selfies and video calls.

Other leaked specifications include an in-display fingerprint scanner, Android-12-based NothingOS, and stereo speakers.

No charger in the box

The Nothing phone (1) also supports wireless charging and may be the only phone in the market with a Snapdragon 700-series chip to feature wireless charging. The lack of a bundled charger may also work as a push for new users to pick up a wireless charger instead.

Since the design of the Nothing phone (1) was made official earlier this month, buyers have been wondering if the phone will also launch in a second colourway in addition to a white variant that Nothing has used in all its promotional imagery. 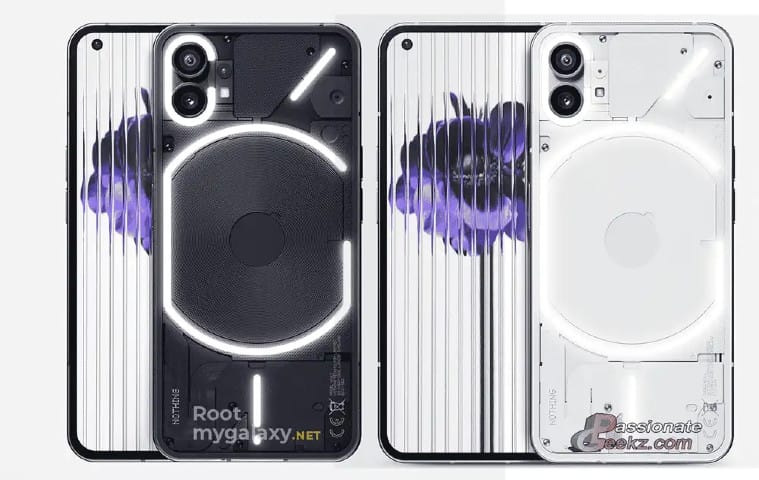 The Nothing phone (1) could also launch in a black colour variant, as per leaks. (Image Source: RootMyGalaxy)

Now a new leak by RootMyGalaxy.net and PassionateGeekz has revealed two new renders of the phone (1), one of which features a dark black shade on the back. As per the renders, both variants will, however, still feature white lights on the Glyph Interface. The publication had also previously leaked a case that Nothing is working on, that will wirelessly charge the battery of the phone (1) when attached to the device.

Nothing revealed its invite-only system last week that will be used to hand a limited number of users early access passes. Users who topped the waitlist and managed to get a Nothing phone (1) pre-booking pass are able to book the phone for themselves for Rs 2,000.

These users will be the first-in-line to get the phone should they choose to buy it, when the device launches on July 12. Those who do buy the phone then will get a Rs 2,000 discount to compensate for the pre-booking amount. Nothing will also partner with Reliance Digital in India for offline sales of the phone (1) after launch, as per a new report by tipster Yogesh Brar.

How to play on PC