NASA notes in its press statement, “the combined mass of this galaxy cluster acts as a gravitational lens, magnifying much more distant galaxies behind it. Webb’s NIRCam has brought those distant galaxies into sharp focus – they have tiny, faint structures that have never been seen before, including star clusters and diffuse features.” 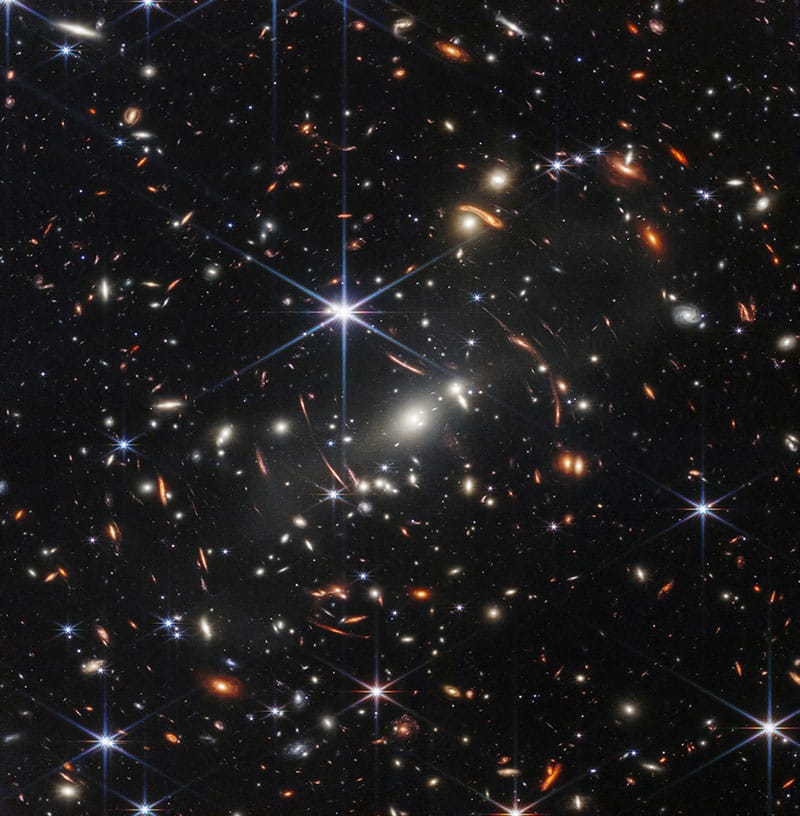 Size of a grain of sand

The image is another reminder of the vastness of the universe. According to NASA, “this slice of the vast universe covers a patch of sky approximately the size of a grain of sand held at arm’s length by someone on the ground.”

Taken from the Near-Infrared Camera (NIRCam)

The image was taken with the telescope’s Near-Infrared Camera (NIRCam). The image is combined using images taken at different wavelengths, a grand total of over 12.5 hours.

NASA will release more first images from the James Webb Space Telescope. NASA has released a list of targets for which it will reveal full-colour scientific images. The list of images will include Carina Nebula, WASP-96 b (spectrum data), Southern Ring Nebula and Stephen’s Quintet. It has already revealed the image for SMACS 0723, which is a cluster of galaxies that distorts the light of objects behind it. NASA will host a livestream for this later tonight. It will start at 8.00 pm IST.

The James Webb Space Telescope has a ​​primary mirror which is 6.5 metres in diameter, much much larger in size compared to previous telescopes. In comparison, the Hubble’s mirror was only 2.4 metres. This mirror–which is covered in gold as well– is what captures the light from the objects that the telescope is trying to observe. Read more about the mirrors here.

Nothing phone (1): Space for another brand, but a tough market to please, say analysts