In 2018, the James Webb Space Telescope, the beleaguered project to build an instrument that could gaze back to the earliest stars in the universe, appeared to be going off the rails. Again.

The pieces of the telescope and its instruments were complete, but they needed to be assembled and tested. The launch date was slipping further into the future, and the costs, already approaching $8 billion, were again rising. Congress, which had provided several major infusions of financing over the years, was unhappy that NASA was asking for yet more money.

This is when Gregory Robinson was asked to take over as program director of Webb.

At the time, Robinson was the deputy associate administrator for programs at NASA, making him responsible for assessing the performance of more than 100 science missions.

He said no. “I was enjoying my job at the time,” Robinson recalled.

“He had a kind of the confluence of two skills,” Zurbuchen said of Robinson. “The first one is he had seen many projects, including projects that were in trouble. And the second piece is he has that interpersonal trust-gaining activity. So he can go into a room, he can sit in a cafeteria, and by the time he leaves the cafeteria, he knows half of the people.” 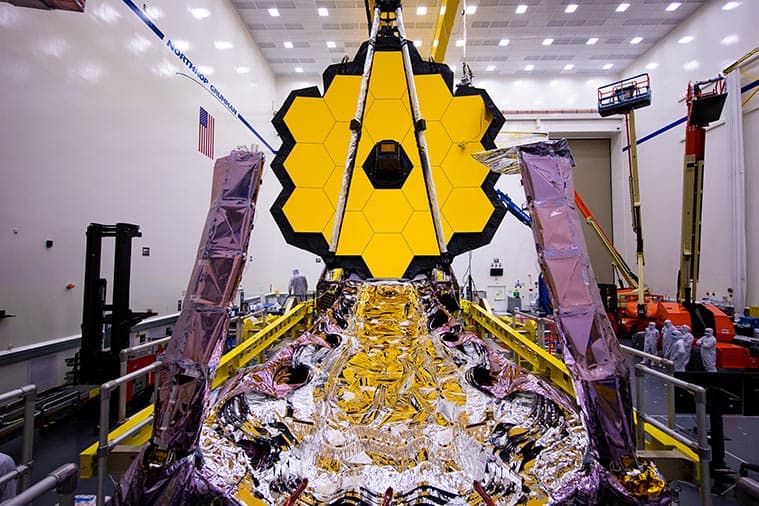 In an undated image provided by Northrop Grumman, work was performed on the James Webb Space Telescope at Northrop Grumman in California in April 2020. The largest space telescope ever built is ready to show us what it’s been looking at for the past six months — but before NASA gives the world a slide show from the James Webb Space Telescope’s early cosmic sightseeing, the White House will provide a brief preview on Monday, July 11, 2022. (Northrop Grumman via The New York Times)

Eventually, Robinson relented. In March 2018, he stepped into the task of getting the telescope back on track and into space.

“He twisted both of my arms to take over Webb,” Robinson said.

His path to that role seemed an unlikely one.

At NASA, Robinson, 62, is a rarity: a Black man among the agency’s top-level managers.

“Certainly people seeing me in this role is an inspiration,” he said, “and also it’s acknowledging they can be there, too.”

He says there are many Black engineers working at NASA now, but “certainly not as many as there should be” and most have not risen high enough to be seen by the public, for example taking part in news conferences as Robinson has following the launch of Webb.

“We have many things going on to try to improve,” Robinson said.

Born in Danville, Virginia, along the state’s southern edge, he was the ninth of 11 children. His parents were tobacco sharecroppers. He attended an elementary school for Black children until fifth grade, when the school district finally integrated in 1970.

He started working at NASA in 1989, following some friends who had already worked there. Over the years, his jobs included deputy director of NASA’s Glenn Research Center in Cleveland, and deputy chief engineer.

The Webb assignment came in the midst of bad publicity for the project.

The target date for launching had slipped again, to May 2020 from 2019. NASA had set up a review board of outside experts to advise what needed to be done to get the Webb to the finish line.

A month into Robinson’s tenure, a botched test provided a vivid illustration of how much needed to be fixed.

Spacecraft have to survive the vigorous vibrations of launch, so engineers test them by shaking them. When Webb was shaken, embarrassingly, screws holding the cover of the telescope’s large, fragile sun shield popped loose.

“That set us back months — about 10 months — just that one thing,” Robinson said. The launch date was pushed to March 2021, and the price tag rose by another $800 million. The incident seemed like a replay of earlier troubles the Webb project had run into. When the telescope was named Webb in 2002, it had a budget forecast of $1 billion to $3.5 billion for launch as early as 2010. When 2010 arrived, the launch date had moved to 2014, and estimated costs for the telescope had risen to $5.1 billion. After reviews found both the budget and the schedule to be unrealistic, in 2011, NASA reset the program with a much higher budget not to exceed $8 billion and an October 2018 launch date.

For several years after the 2011 reset, the program looked to be in good shape. “They were knocking off milestones,” Robinson said. “Really good schedule margin.”

But, he added, “Things happen in there that you don’t see. The ghosts always catch you, right?”

For the screws that popped off during the shake test, it turned out that the engineering drawings did not specify how much torque needed to be applied. That was left to the contractor, Northrop Grumman, to decide, and they were not tight enough.

“You should have a specification to make sure it’s right,” Robinson said.

The review board released its report, noting a series of issues, and made 32 recommendations. NASA followed all of them, Robinson said.

One of the recommendations was performing an audit of the entire spacecraft to identify “embedded problems” — mistakes that occurred without anyone noticing.

The engineers checked the drawings and specifications. They looked at the purchase requests to make sure that what was ordered matched the specifications and that the suppliers provided the correct items.

“There were multiple teams set up, led by the most experienced people,” Robinson said. “They really dug into the paperwork.”

For the most part, the hardware did indeed match what was originally designed. A few things did not match — Robinson said none of them would have to led to a catastrophic failure — and those were fixed.

When Robinson took over as program director, Webb’s schedule efficiency — a measure of how the pace of work compared with what had been planned — was down at about 55%, Zurbuchen said. That, in large part, was the result of avoidable human error.

Zurbuchen said the Webb team had been full of smart, skilled people, who had become wary of raising criticism. He credited Robinson with turning things around. Within a few months, the efficiency was up to 95%, with better communications and managers more willing to share potential bad news.

“You needed somebody who could get the trust of the team and what we needed to figure out was what was wrong with the team,” Zurbuchen said. “The speed at which he turned this thing around was just astounding.”

A number of new issues, though, caused additional delays and cost overruns. Some, like the pandemic and an issue with the payload enclosure on the European-made Ariane 5 rocket, were out of Robinson’s control. Additional human mistakes did occur, like last November when a clamp band securing the telescope to the launch mount snapped, shaking the telescope but not causing damage.

But when the Ariane 5 carrying Webb finally launched on Christmas, everything proceeded without a hitch, and the deployment since then has gone smoothly.

With the observations beginning, there will soon be no more need for a program director for Webb.

Robinson says, with pride, that he has worked himself out of a job.

MIUI Beta based on Android 13 available for...