I have a fair idea on what is going on in your mind after reading the headline. It is not clickbait, as the Asus’ ROG Zephyrus Duo 16 does cost as much as the base price of a Maruti Alto 800 in India. Yes, it is a valid question to ask why this laptop is priced at Rs 3,91,900. The eye-popping price of the ROG Zephyrus Duo 16 can make anyone stop and take notice, but if I recommend this laptop to hardcore developers or professional video editors, I might get a competently different response. After all, it’s a professional-grade workstation packing desktop-level performance in a laptop form factor. But then, this top-billed machine also has a 14-inch secondary display which turns it into a dual-screen laptop. Despite being a one-of-a-kind notebook with the most unique design I have seen on a laptop, Asus seems determined to make this device a ‘thing’ among professional users. So after using Zephyrus Duo 16 for a few days, here is my review.

Why dual-screen laptops and what do they do differently?

For years, developers and animators have been using two monitors to improve multitasking, giving them the unique ability to run two programmes and easily navigate multiple windows at the same time. This kind of setup works but is not portable and thus limited to home office use. A dual-screen laptop mimics what a dual monitor setup can do but the advantage here is that you can actually carry the notebook and work anywhere, opening infinite possibilities as a creative professional.

I first used a dual-screen notebook made by Asus (the company is a flag bearer of offbeat laptops in the industry) years ago. Although it was heavy and expensive, I thought it was a genuine attempt to make dual-screen laptops useful among a small set of users whose focus is on productivity. Despite the industry not following Asus’ footsteps (Lenovo is another manufacturer attempting to go beyond the traditional laptop design) in making dual-screen notebooks mainstream, the Taiwanese company hasn’t lost faith in the form factor. In fact, Asus is going aggressive with dual-screen notebooks. After several days with the ROG-branded Zephyrus Duo 16 (the device was loaned by Asus India for review), it’s clear that Asus has corrected mistakes and listened to feedback with this dual-screen laptop. Heavier than your average laptop but still mobile

I never expected the Zephyrus Duo 16 to be as sleek and slim as my M1 MacBook Air. The reason: professional notebooks have an extra added weight (even the 16-inch MacBook Pro is on the heavier side) due to the hardware components that power these devices. Everything about the Zephyrus Duo 16, from the way it looks and feels, to how it performs, is an admission that Asus never wanted this notebook to be the lightest computing device on the planet. And I get that message loud and clear.

The Zephyrus Duo 16 still has an all-aluminum case, with the solid build quality. It is heavy at 2.55 kg but easily slips into my trusty Samsonite backpack without any fuss. Pick up the Zephyrus Duo 16 and you will notice its all-black exterior with a dot matrix design and the ROG logo. The branding is subtle and once shut, it looks like a regular laptop. When you open it, it blows your mind in more ways than one. My review unit came in a big box that also included a backpack, a mouse and a gaming headset. Mind you, the power brick along with the cord adds an extra lump to an already heavy laptop.

The reason I was so excited about the Zephyrus Duo 16 was its secondary screen. It is not a gimmick as many thought it would be. On previous versions of Asus’ dual-screen notebooks, I felt the secondary display was dim and the software implementation left a lot to be desired. On the Zephyrus Duo 16, however, Asus has made a number of changes. First up, the “ScreenPad+” display measures at 14-inches with a 3840×1110 pixel resolution (4K). That extra touch-capable display looks sharp and bright, which is a remarkable improvement.

With the Duo 16, I did exactly the same things I’d normally do with an external monitor setup. Having a dual-screen laptop means I could open Zoom on the secondary display and still be able to edit a copy on the main screen. I also feel that the secondary screen is better for tasks, for instance accessing apps like Spotify, chatting with a colleague on WhatsApp or taking a look at Twitter. You can just drag anything you want down there as if you have the second monitor attached to your computer. (Image credit: Anuj Bhatia/Indian Express)

Actually, the secondary screen becomes an extension of the main display (more on that later) when used for certain graphic programmes or compatible games that take advantage of the ScreenPad+. By the way, the secondary screen can also be used to jot down notes or sign a document with the active pen. I can also see a slightly improved Control Panel app with a customisable dial, a slider and button decks for Adobe Create Cloud.

Asus has used a new hinge design on this model that tilts the secondary display up to 13 degrees when you lift the lid. This not only gives you a better viewing angle but also increases the airflow. But its secondary display takes up a lot of keyboard space.

The keyboard is large and responsive but is positioned off-center on the left edge of the machine. I found the keyboard comfortable for typing but may not use it for writing long reviews and feature articles. To its right is a touchpad, which is a tad smaller than average-sized touchpads on laptops though it does the job. It has illuminated numerals and becomes a numeric keypad which is useful. I can’t imagine a person buying this notebook would also want a high-quality mouse. 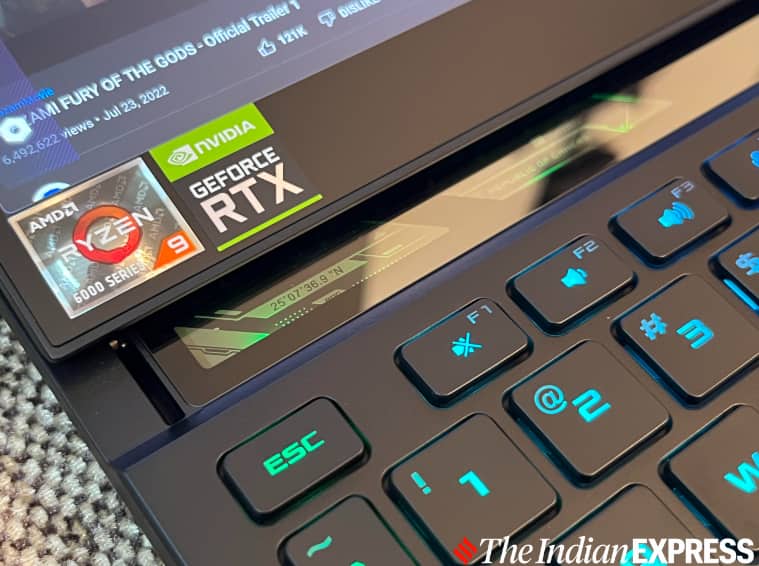 The like the styling of this notebook. (Image credit: Anuj Bhatia/Indian Express)

The Zephyrus Duo 16 features a 16-inch display with a resolution of 2560 x 1600 and a 16:10 aspect ratio. The display uses a mini-LED (the same display tech that Apple uses in its high-end MacBook Pros and iPad Pro) backlighting. Mini LED enables local dimming of thousands of dimming zones, and while it’s still an LCD screen, you get deeper blacks and better contrast than what you might see in an OLED screen but with better brightness and no burn-in. And yes, it hits a peak brightness of 1,100 nits and covers 100 per cent P3 colour space. It’s also DisplayHDR 1000 certified.

The colours in the photos and videos I viewed looked vibrant. Watching Valentino’s fall 2022 collection on YouTube was especially impressive, as everything pops. The high-resolution screen on this machine looks lovely when playing games and the 165Hz panel delivers great visuals when playing Fortnite. 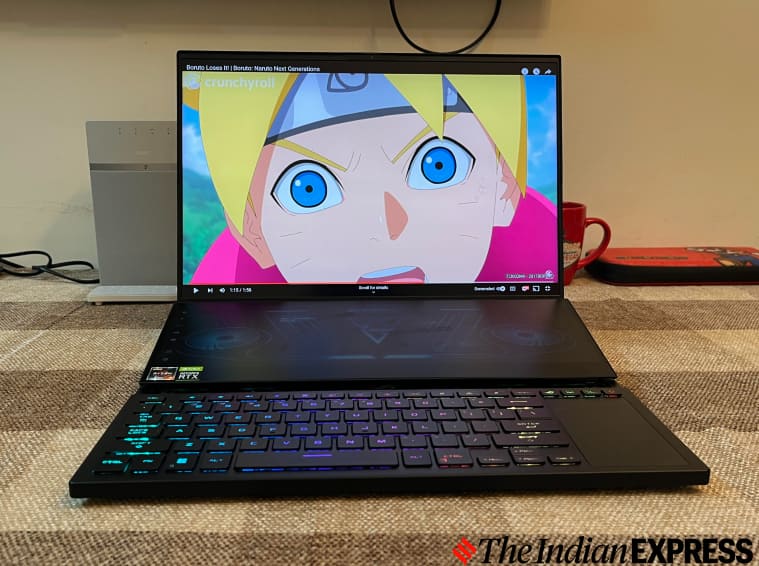 The 16-inch display looks bigger, thanks in part to its super thin left and right bezels. Along the top of the display is a 720p infrared camera that works with Windows Hello to use facial recognition for tasks such as signing in to your Windows account or logging into apps. But it’s an average webcam.

Another feature that impressed me about the Zephyrus Duo 16 was its speakers. The sound from the six-speaker setup sounds excellent for laptop speakers, with some improvements to the bass.

Performance is acceptable but the device gets warm

A new Duo 16 can cost differently (it starts from Rs 249,990)- it all depends on the configuration. My review unit came with AMD’s Ryzen 9 6900HX Mobile processor with 8-cores and 16-threads, an Nvidia GeForce RT3070 Ti laptop GPU with 16GB of GDDR6 of memory, a 2TB NVMe SSD for storage and 32GB of DDR5 memory.  If you are a creative professional who pushes your computer to the limits, the level of performance you will get from this machine is unmatched. The truth is, being an average user I barely taped into the computer’s potential. My regular workload mostly consists of writing and uploading copies in CMS, editing copies, communicating over WhatsApp and email, editing images and videos, browsing the web, and running multiple Chrome tabs at the same time. I never experienced a second of a lag on the Duo 16. The device should be able to handle tasks like editing 4K videos, playing AAA titles, streaming of videos, and the encoding, compression and decompression of large files which are something common for gamers and content creators. Yes, the machine gets hot after extensive use but I was expecting this from a machine like this which has a remarkable powerhouse GPU and processor.

The battery life is poor

Perhaps what disappointed me the most is the battery life on this machine. With a creator-focused laptop like this, you expect the battery life to be under 5 hours, and that’s with every notebook I have tested over the years. But with the Duo 16 (and this one has an AMD processor over an Intel one), I was expecting the battery life to vastly improve. After lowering both screens’ brightness to 50 per cent, the Duo 16 managed to get the last 2 hours 53 minutes before it ran out of power. For people who want an extended battery life from a professional-grade notebook, weaker battery life is the worst thing about the laptop. The dual-screen laptop is still far from getting mainstream status, and the Zephyrus Duo 16 proves why

I am not disappointed by the Duo 16 or what Asus is trying to do with the concept of dual-screen laptops. The changes that the Duo 16 comes with such as a brighter ScreenPad Plus, mini-LED main display and power-packed performance are welcome. But the notebook falls short when you add the context of the Rs 4 lakh price tag, not-so-impressive battery life, and the bulky form factor. As a reviewer and someone who enjoys technology, I am still excited by the prospects of a dual-screen notebook. Just make it a bit lighter in every sense.