As I was leaving for an evening walk the other day, I got a call from an old friend who narrated his ordeal of how his decision of buying an expensive laptop turned out to be a bad one. He just chose the wrong laptop, one that wasn’t made for people like him. This happens with many people who without a thought spend a lot of money to get a laptop but only realise later that the device they bought didn’t live up to expectations. The Inbook X1 Slim doesn’t set any such unrealistic expectations that make it hard to justify spending upwards of Rs 30,000 on Infinix’s latest budget laptop. But is it something I want to recommend to a friend or a family member? Here is my review of the Inbook X1 Slim.

Budget notebooks rarely excite and that’s a fact. But the Inbook X1 Slim is an exception. It is a handsome 14-inch notebook with an understated and clean design, something you won’t find often in a budget laptop. It weighs 1.24 kg and feels sturdy, thanks to its aluminium chassis. Most laptops in this price bracket are heavy and made out of plastic materials. So seeing a notebook with a metal body in the budget segment is a rarity. My review unit came in “Cosmic Blue” and it looks stunning. The notebook is also available in Aurora Green and Starfall Grey colour options. The Inbook X1 Slim felt almost invisible when I dropped it in my tote bag and headed out for an interview. The two-tone finish is a pleasure to look at, almost as if I am using a high-end notebook. Brush your fingers across and it gives a feeling of subtle luxury. There are no creaking sounds when you open and close the lid. The two rear corners house multiple connectivity ports, and one of them has an SD card slot. On the sides live two USB-C ports (one for data transfer), a USB 3.0, an HDMI 1.4 and a 3.5mm headphone jack.

Once you open up the X1 Slim, the first thing you will notice is the screen. A 14-inch Full HD IPS display is bright, reaching 300 nits. The screen is easy to read from the sides and I had no trouble browsing or watching YouTube videos on the X1 Slim. Sure, it doesn’t have top-end features. And it doesn’t use an OLED or AMOLED technology. But what it offers display-wise will be good for most people.

Then, there is the webcam. It’s a standard 720p HD web camera. No matter how much I pinpoint the lack of 1080p web cameras on laptops, brands have yet to acknowledge that users want high-quality cameras on their laptops. 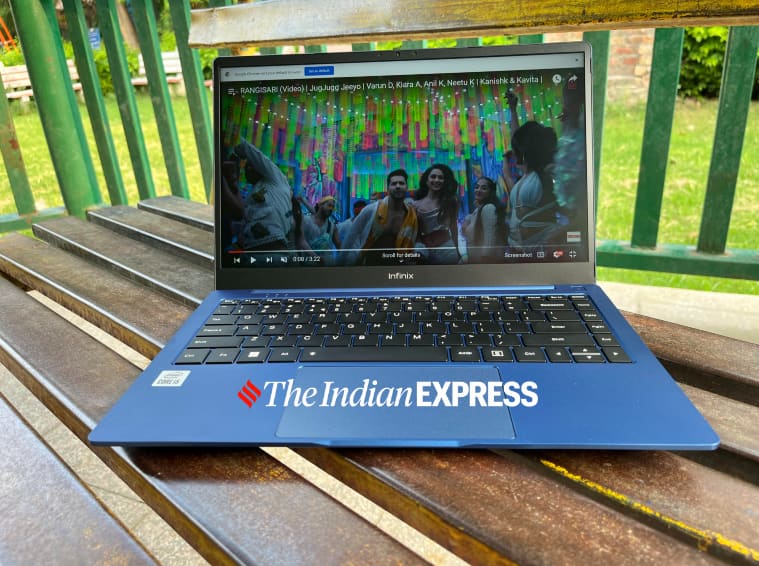 To my surprise, the speakers weren’t disappointing. Usually, those featured on low-end laptops don’t offer loudness or mid-range response. But the X1 Slim’s speakers are fine for listening to music and attending video calls.

The notebook’s keyboard is mushy and soft. It’s serviceable but not remarkable. After a while, it feels slightly better, whether you are typing a review or making a presentation. The backlighting on keys is nice and bright when typing in the dark. If you like silent keyboards, this isn’t for you. If you like silent keyboards, this isn’t for you. (Image credit: Anuj Bhatia/Indian Express)

The trackpad underneath the keyboard is large, but it’s made of plastic and not glass. It’s prone to misclicks, something I observed in my testing. Also, I found the trackpad to be stiff. You need to press hard to register the click — not such a great experience. Thankfully, it handles scrolling and gestures just fine. It’s not a deal-breaker, but I am a bit disappointed to see the average keyboard and trackpad on the X1 Slim. The fingerprint reader on the top right corner of the keyboard is accurate.

The i5 version which I am using is good for students or anyone who is ready to pay slightly more but want reliable performance, quick boot time and faster charging. I streamed songs via Apple Music, watched YouTube and Amazon Prime Video and wrote reviews and feature stories with 15 to 20 tabs open in Chrome without noticing any stutter or slow performance. Windows 11 isn’t a light OS (unlike Google’s Chrome OS), and the Intel i5 processor and 8GB RAM proved plenty powerful for the time being. The X1 Slim’s battery wasn’t great, with the notebook lasting anywhere between 4 and 5 hours on a single charge. I didn’t quite reach close to the 10 hours of use as claimed by Infinix. The X1 Slim also supports fast charging, and in my testing, it brought it up to roughly 65 per cent of charge in approximately 55 minutes. Mind you, the USB-C port (one of them) handles video out but doesn’t support Thunderbolt 4.

Infinix Inbook X1 Slim review: Should you buy one?

The X1 Slim isn’t leading the way in performance, and laptops in this price point, in general, don’t seem to be offering anything groundbreaking. Having said that, for those looking for something practical and dependable in the budget laptop space the Infinix Inbook X1 Slim fits the bill perfectly despite some imperfections.

Apple Watch 8 could include ‘temperature sensor’, no heart-rate on AirPods Pro 2: Report