Is it really possible to reimagine something as ubiquitous as a smartphone? Well, over the past few years many companies big and small have given it a shot, while others like Apple have stuck to the proven path pushing only incremental updates every cycle. Now, Nothing–the oddly-named new venture of OnePlus co-founder Carl Pei–wants to take a new look at what they can do to a smartphone, and they seem to have something going here for sure.

Usually while attempting smartphone reviews it is hard to fill up this part, and even if we acknowledge that a set of features are new they are usually not something that pushes the envelope on innovation. But the Nothing phone (1) is different.

The Nothing phone’s back with the LED lights. The phone has over 900 LED lights at the back. (Image credit: Nandagopal Rajan/Indian Express)

Yes, the phone has a different design, but without changing the fundamentals. Though the chassis looks too much like that of an iPhone, the Nothing phone (1) has a glass rear panel that lets you see what is inside. And it is not like you can see the mess inside, as Nothing has redesigned the innards to give it a good look with a medley of panels. What is clearly visible is the wireless charging coil which also has been reimagined to make it look nothing like what it usually does. This also means buying a cover that blocks this all is sort of pointless and you might want to stick to the Nothing transparent cover which showcases this transparency.

With the transparent back, Nothing is emphasising the wireless charging feature on the phone. (Image credit: Nandagopal Rajan/Indian Express)

The other new aspect could well be the USP of this. That is what Nothing calls the Glyph interface. This is a set of 900 LEDs in the back that light up in different patterns customised to your ringtones and notifications. Since there are many combinations possible with the different strips these can be set to silently alert you about exactly who is calling. There are many other occasions too where these LEDs lights can be used, like when you are waking up the Google Assistant. Overall, this is a new way for the phone to communicate with you. This is certainly a feature that has a lot of potential over time, though some might find it a bit too loud for their taste. But this is a head-turner for certain, especially if you get an incoming call when you are in a movie hall or walking on a busy street at night. And that stick-out value itself will be something a lot of users might queue up for.

The use of dot matrix fonts all over is both contemporary and easy on the eye.(Image credit: Nandagopal Rajan/Indian Express)

The other interesting aspect of the phone is the interface inside. The company has not gone out of the core pure Android experience much but has added tweaks that bring in additional value for users and clearly differentiate the brand. For instance, the use of dot matrix fonts all over is both contemporary and easy on the eye. I loved how for each icon or folder on the homepage, there is an option to expand the size thus making this rather young phone a good option for ageing old folks like me.

Let’s be clear about one thing: the Nothing phone (1) is a mid-range phone. And our expectations too have to be in the same range. It has a mid-range Qualcomm Snapdragon 778G+ processor, which is powerful enough for everything the phone promises. But it might stutter a bit if you try and make it do more than what it signed up for. With most of the gaming, 4K video recording and multi-tab browsing that I tried on this phone, there were no issues, lags or stutters. It has a mid-range Qualcomm Snapdragon 778G+ processor, which is powerful enough for everything the phone promises. (Image credit: Nandagopal Rajan/Indian Express)

Nothing does not believe that a phone really needs three cameras and I tend to agree. What Nothing phone (1) does is offer two cameras that work really well instead of three that might be so-so. I loved the colour reproduction with both the regular and ultra-wide cameras. 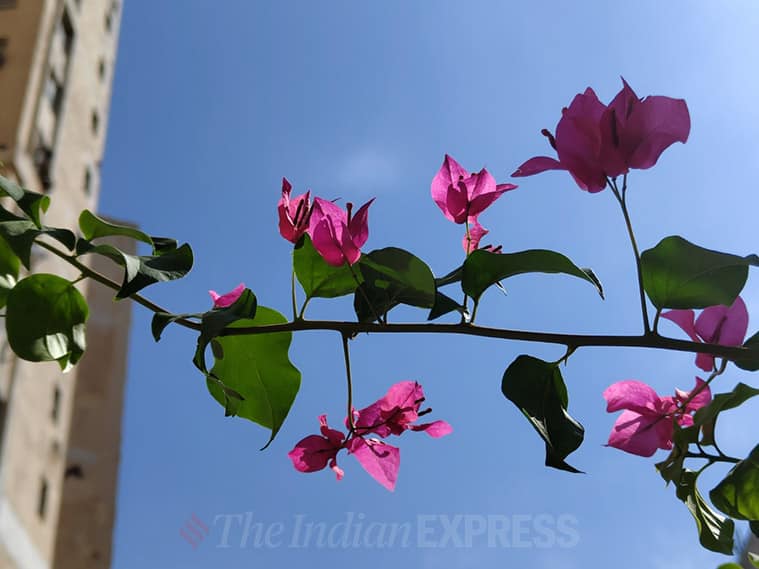 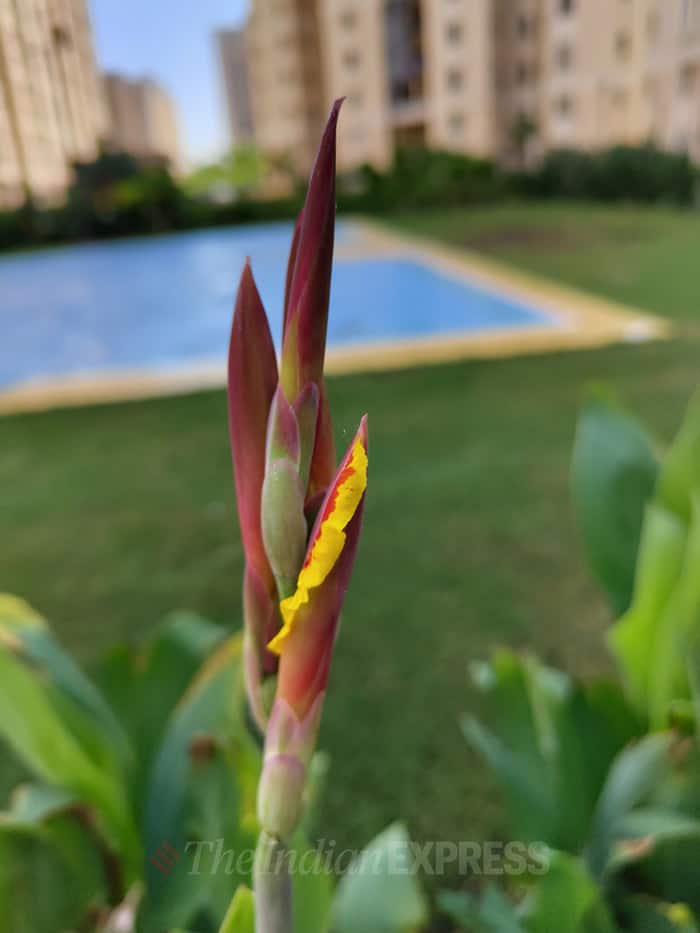 An image taken using the Nothing phone (1) of a plant. (Image credit: Nandagopal Rajan/Indian Express) Another image of a plant placed indoors taken with the Nothing phone (1) (Image credit: Nandagopal Rajan/Indian Express) A low-light image of the lamp captured using the Nothing phone (1). (Image credit: Nandagopal Rajan/Indian Express)

The low-light performance is good too. In fact, I used the portrait mode in low-light and was able to adjust the bokeh effect really well. This is impressive. 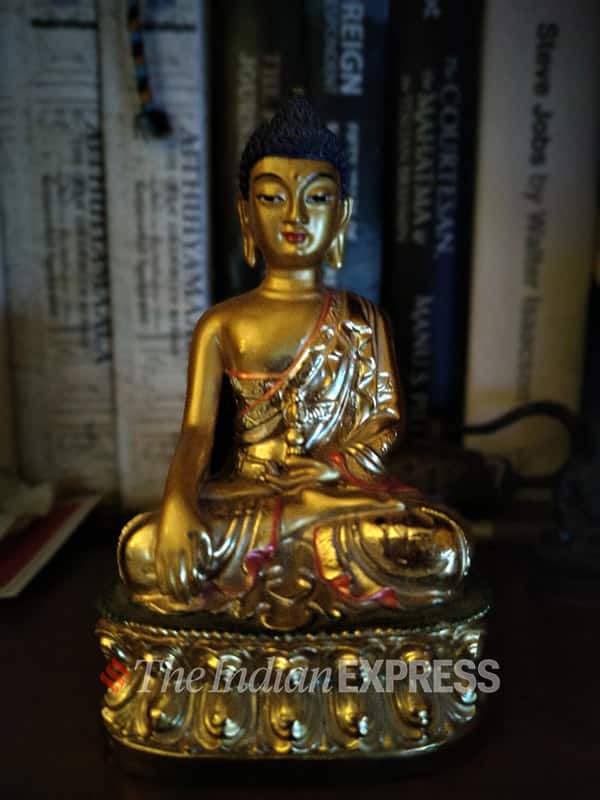 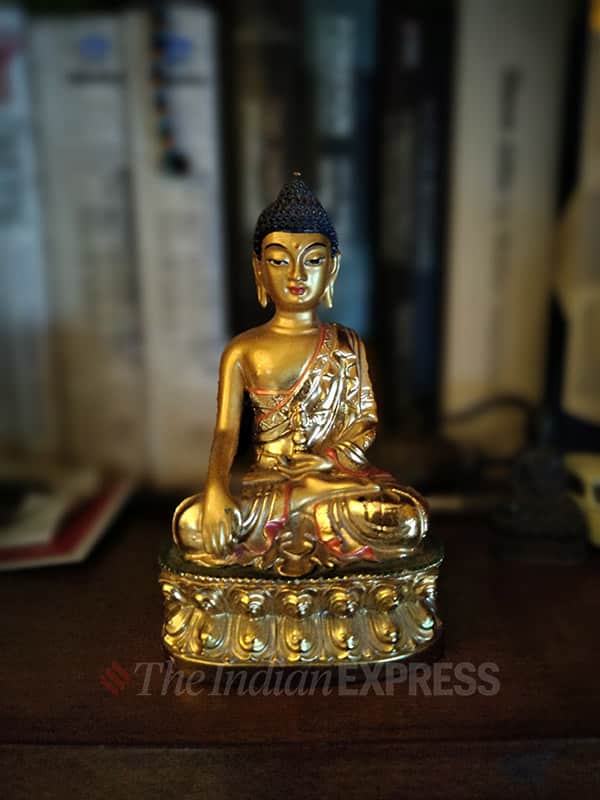 The macro mode and Expert mode are hidden away, but still worth the effort. The overall UI of the app is also easy to use and more in line with iOS and not Android.

The video capabilities are good too and from a camera perspective, this phone has it all.

The 6.55” flexible OLED display is vivid and great for content consumption. It helps that the speakers are really good if you are someone who binge-watches reels and other stuff on your phone.

The 4500 mAh battery easily lasts a day and a half of usage most of the time and can be recharged back to full if you have a fast charger at home. It also supports wireless charging, but at a much slower rate. And since Nothing phone (1) ships in a chocolate box-like packaging, this does not come with the 33W wall charger and you will have to spend some extra bucks for that. 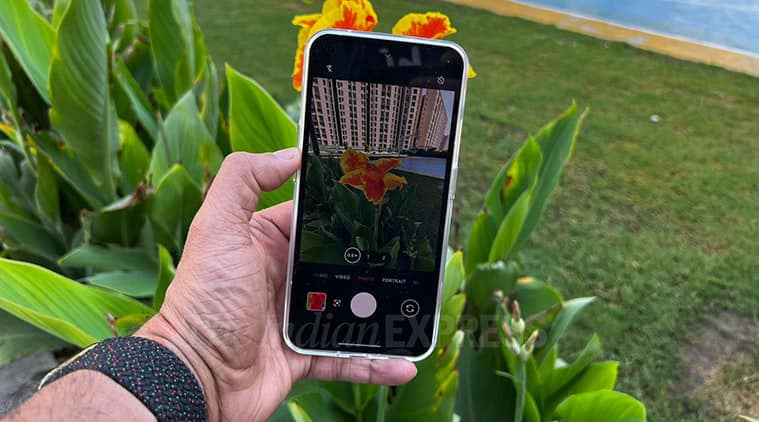 The Nothing phone (1) ‘s display could have been brighter, especially when used outdoors. (Image credit: Nandagopal Rajan/Indian Express)

Nothing phone (1) review: What’s not that good?

My only real issue with the phone is that the display is a bit hard to make out under harsh sunlight, even if you are at full brightness. I noticed this while trying to click picks under the morning sun in Noida. The Glyph is clearly the standout feature of this phone. But there are times when you are trying to figure out why it did not light up. I think a few updates will need to make this work smoothly across all use cases.

The Nothing phone (1) comes retail box might remind you of a fancy chocolate box. (Image credit: Nandagopal Rajan/Indian Express)

Nothing phone (1) review: Should you buy?

Yes, if you want a phone that is different from the rest of the options available in the medium range. But be aware that this is a new brand and being an early adopter could come with some frustrations. Also, after a point, the novelty of the Glyph will wear out and the phone will have to stand out on sheer performance. Since this is a debut device we will need to wait a few months to see how that pans out, especially with after-sales service and customer support.

At the moment, this is a good Android phone that needs to be appreciated for its bold effort to step out of its comfort zone and take some risks. That should make it an interesting option for a lot of users considering phones from the likes of Samsung, OnePlus, Oppo and Vivo in this price range.