Oppo’s Reno series has historically been marketed and known for one major aspect – photography. As a result, the Reno series has produced multiple phones over the years that primarily focused on camera performance and were usually average in other aspects, usually powered by a mid-range chip. But the new Oppo Reno 8 Pro takes a different approach.

This Pro phone ups the ante with a flagship-grade MediaTek Dimensity 8100 Max chip, 80W fast charging, a premium glass sandwich design and other specifications to match. However, at Rs 45,999 the Reno8 Pro is also pricier. Does the camera keep up, and does the Reno 8 Pro make sense at this price? Find out in our full review below.

The Oppo Reno 8 Pro has excellent design and is built like a tank. There is not one point on the entire surface of the device that doesn’t feel like a part of a premium device. The large camera island may be subjective (I personally, am not a fan of huge camera islands) but the rest of the phone is a piece of art. 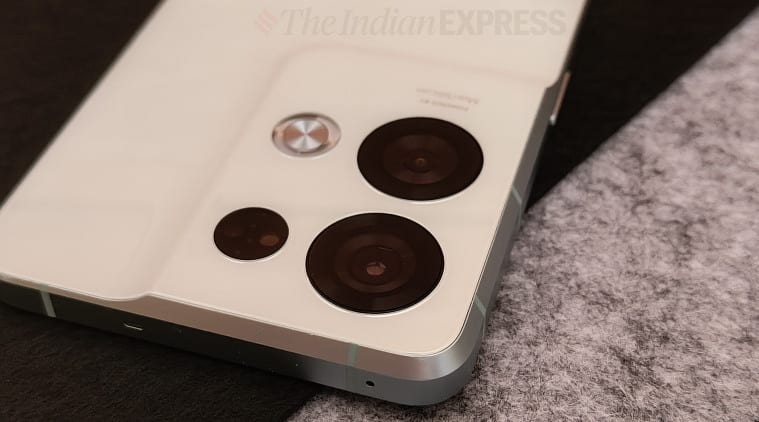 The camera module on the Reno 8 Pro is large, but it’s one of the prettiet ones I’ve seen. (Image Source: The Indian Express/ Chetan Nayak)

In the week that I have used this as my primary phone, at least a dozen people including friends and strangers have asked me about the phone’s brand, and it was just because the design caught their eye when the device was in my hand. The thin bezels, metal frame, and single-piece glass back are all key here.

The phone is also a very slippery one and will slide across any smooth surface if given an opportunity. Despite my best efforts, I did drop the phone a few times but there haven’t been any issues, chipped paint marks or dents yet on the device. So, yes, it can take a beating without folding.

The 120Hz AMOLED screen on the phone is gorgeous to look at. It isn’t a 10-bit panel if you did care about that, but otherwise, it features punchy colours and deep blacks. The phone can also get bright enough for day-to-day use, although you may find movies with darker scenes a little lacking compared to some other phones in this segment due to just 950 nits of peak brightness. 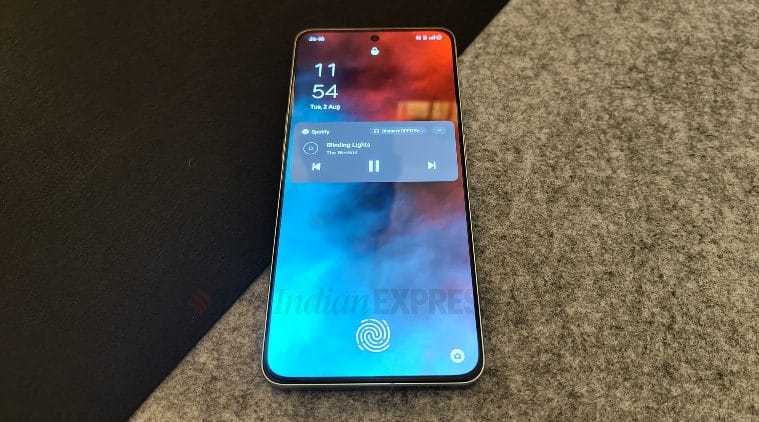 One thing I didn’t like here, however, was a missing dynamic refresh rate mode. For a phone that costs above Rs 40,000, the ability to stick only to 60Hz or 120Hz and not intelligently switch between the two felt quite limiting.

The Reno 8 Pro really surprised me in this department. Not only is the device snappy in day-to-day tasks, but it is also excellent at gaming. Resource-heavy games like Genshin Impact ran without any problems on the Reno 8 Pro and the now-banned BGMI even supported HDR graphics and 90fps framerate (at Smooth graphics) during my testing. The in-display fingerprint sensor was fast and accurate always, the stereo speakers were balanced and the audio output was also pretty loud and rich. 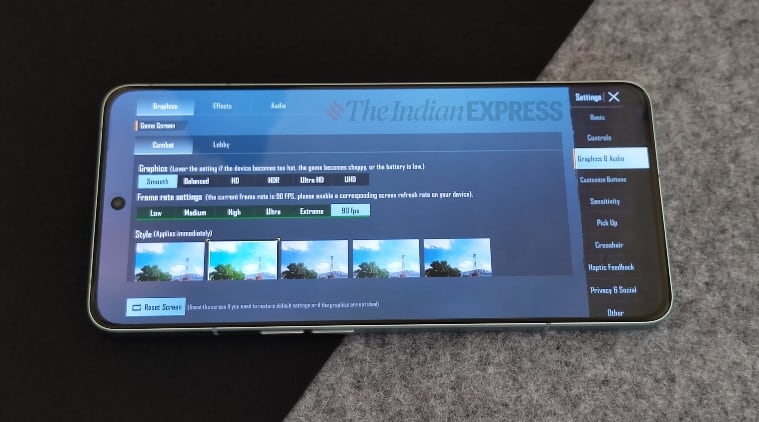 BGMI supported 90fps gameplay on the Reno 8 Pro, before the game got banned, but the Reno 8 Pro is powerful enough for any title out there. (Image Source: The Indian Express/ Chetan Nayak)

Oppo’s ColorOS is far from stock Android, so if a minimal and clean user interface (UI) is what you want, this isn’t the phone you’re looking for. Instead, you find a heavy UI with features and customisation packed into every corner and a bunch of pre-installed apps, most of which can be uninstalled/disabled.

The Reno 8 Pro has great battery life and can easily be a one-and-a-half-day phone on moderate usage. I saw screen-on times of around 7 to 8 hours through my testing and getting the phone to die on the same day even with somewhat heavy day-to-day use is quite difficult. The 80W fast charging is icing on the cake here, and charges the phone up halfway in about 15 minutes, while a full charge will take another 15-20 minutes depending on usage. With upgrades in the aesthetics and performance aspects of the phone, it’s the camera of this Reno 8 Pro that fails to stand out among competing phones in this price. This isn’t a bad camera setup, in fact, it’s pretty decent. But you expect a bit more at this price. The 50MP primary camera lacks OIS support and the 2MP tertiary sensor is as useful as other 2MP cameras (not quite).

The main camera takes great shots outdoors and indoors, but the ultrawide camera is pretty average. During low light and artificial lighting, the shots, however, leave you expecting some more quality. 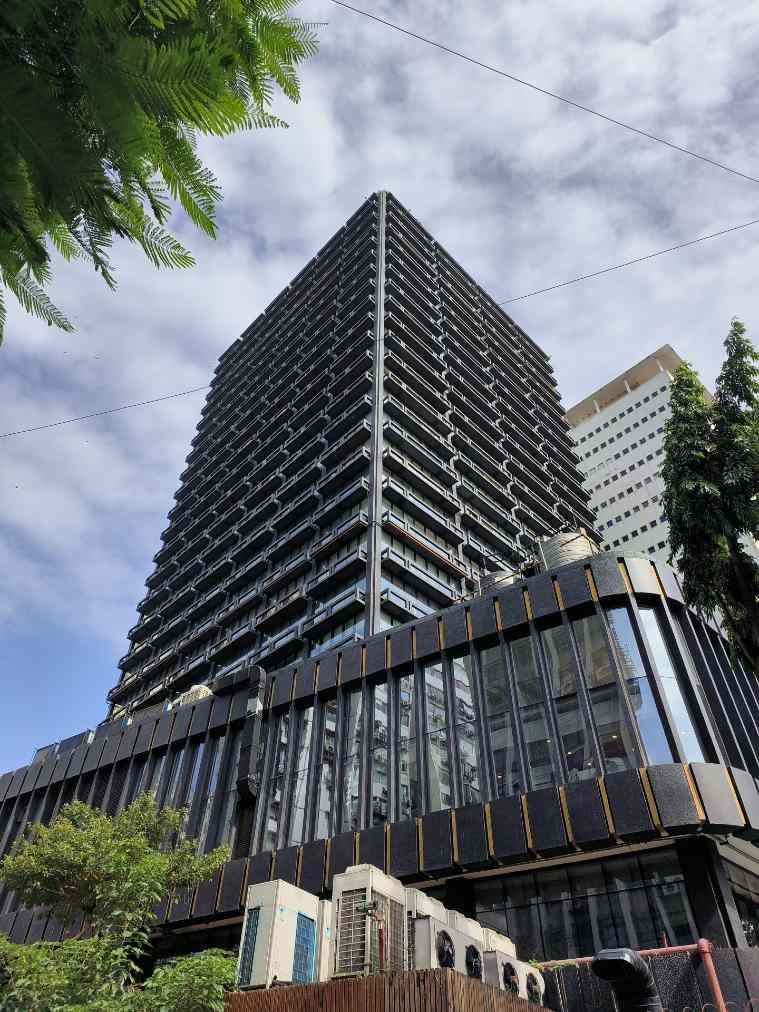 A building in Mumbai captured with some clear skies. (Image Source: Chetan Nayak/ The Indian Express) 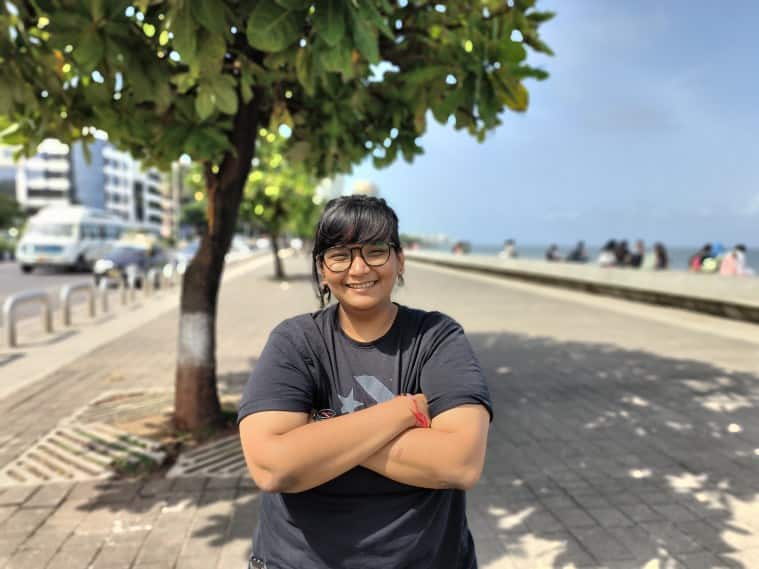 The highlights and shadows look great when there is ample lighting. (Image Source: Chetan Nayak/ The Indian Express) 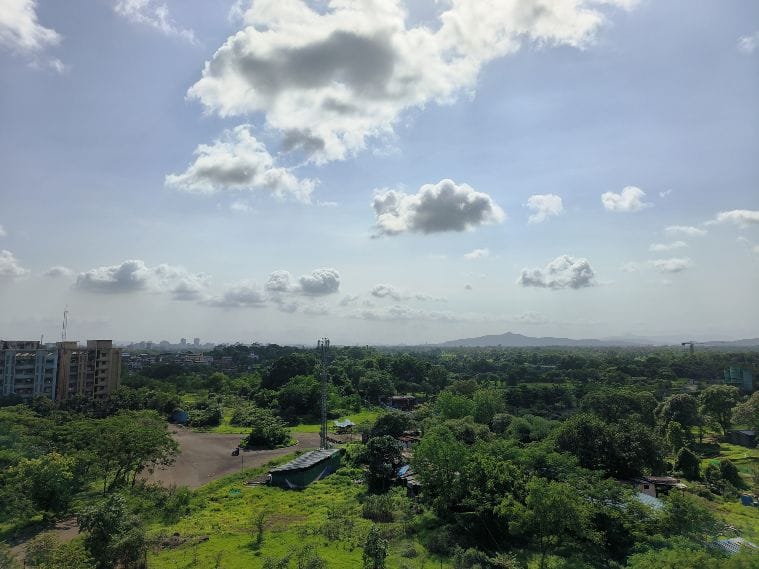 The phone’s video recording capabilities are also good, but not spectacular, and that includes the night mode powered by the company’s MariSilicon tech. The front camera is feature-rich and takes pretty clear shots, but seems to always want to smoothen textures and skin tones appear more white than they should be. You hence, end up with images that look like they have had a filter on, even when that isn’t the case.

Verdict: Is the Oppo Reno 8 Pro for you?

The Oppo Reno 8 Pro excels at many aspects, but not all of them. While it is good at performance and gaming, it also is the most expensive of all Dimensity 8100 phones in India at the moment; almost twice as much as the Redmi K50i, the most affordable phone with the same chip. Being a Pro variant in the Reno family, the camera and video capabilities are good, but my expectation was higher.  If you take the pricing out of the equation, the Reno 8 Pro is a pretty good overall package. If the asking cost drops in the future, I would recommend picking this over the OnePlus 10R and Realme GT Neo 3. For now, you are paying a slight premium if you pick this one.

OnePlus 10T launches tomorrow: How will it be different from the OnePlus 10 Pro?