Redmi K50i review: The K series is back, but does it stand out?

When Redmi introduced the K20 series in India in 2019, there was no doubt that it was among the best value-for-money mid-range options in the market. It offered the top-end Qualcomm Snapdragon 800-series processor, had a premium all-glass design, and even a pop-up selfie camera. At Rs 27,999, the Redmi K20 Pro had everything you would want in a mid-range flagship in 2019. But, the K20 series came at a time when the Redmi brand was better known for its budget options. Some deemed the price too high. And then the K series disappeared–well for India at least– for the next two years. With the Redmi K50i, it is making a comeback of sorts. But the market it is entering is different.

For one, the Rs 25,000 to Rs 40,000 segment is where we are seeing so many bigger brands launch. OnePlus, which till 2019 was limited to the Rs 40,000 and above segment, now has a completely separate Nord and R series for this price bracket. And let’s not forget the latest entrant ‘Nothing’. So where does the Redmi K50i fit in? Does it have what it takes to play in this segment? Here’s our review. 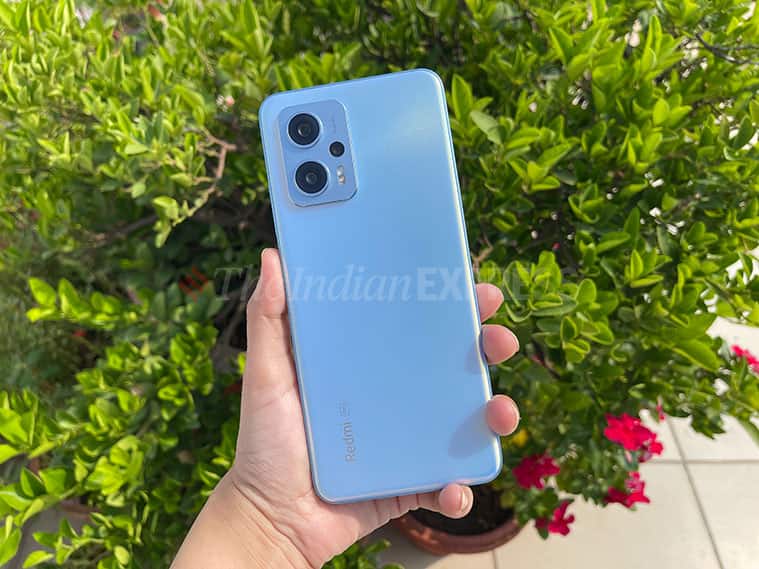 The Redmi K50i does mark some distinct changes compared to the K20 series. For one, that premium all-glass back design is now gone. The body is all plastic now, including the frame. The device comes in three colours now: Phantom Blue, Quick Silver and Stealth Black. The blue, which we have for review, is a bit sparkly at the back. And it takes on hues of gold depending on the light.

The Redmi K50i now has a Mediatek Dimensity 8100 processor. The Dimensity 8100 is also being used on the Oppo Reno8 Pro, which just launched in the market. The OnePlus 10R also has the same processor. The Redmi K50i gets an LCD panel this time, but with a 144Hz refresh rate. (Image credit: Shruti Dhapola/Indian Express)

Redmi has also traded the AMOLED display seen on the previous K20 for an LCD FFS display (Fringe-Field Switching). The display refresh rate is 144Hz, and the phone comes with Dolby Vision and Dolby Atmos certification. Redmi’s justification is that the FFS display for LCDs is supposed to be better than the traditional LCDs. This is supposed to offer improved battery efficiency and wider viewing angles, according to the company.

Let’s start with the display. Now, this is an LCD and not an AMOLED — a decision that will no doubt lead to several debates. But the screen works well, it has adequate brightness. I watched shows on Netflix on the device, including episodes of Brooklyn Nine-Nine and Love Death & Robots. The experience was good enough. Xiaomi is letting users switch between three options for refresh rate: 60 Hz, 90 Hz and 144 Hz. I had switched to the highest during the review–though keep in mind that tends to lead to more battery consumption. There’s no doubt that this phone is meant to be a heavy-duty performer and geared toward those into gaming. This also explains why Redmi is launching it in only two variants: 6GB RAM+128GB and 8GB RAM+256GB storage. I have the 8GB RAM option for review. There’s no microSD slot out here. This is a phone meant to handle heavy-duty tasks, and the Mediatek Dimensity 8100 Max is perfect for this. Games like Genshin Impact, and Asphalt 9 (played at max graphics) ran without any problems or stutters. When playing Gensin for around 10-15 minutes, I noticed the back getting a little warm, but it was nothing too concerning. Other games, switching between apps, etc was not a problem. The Redmi K50i delivers well on the day-to-day performance given the processor here. 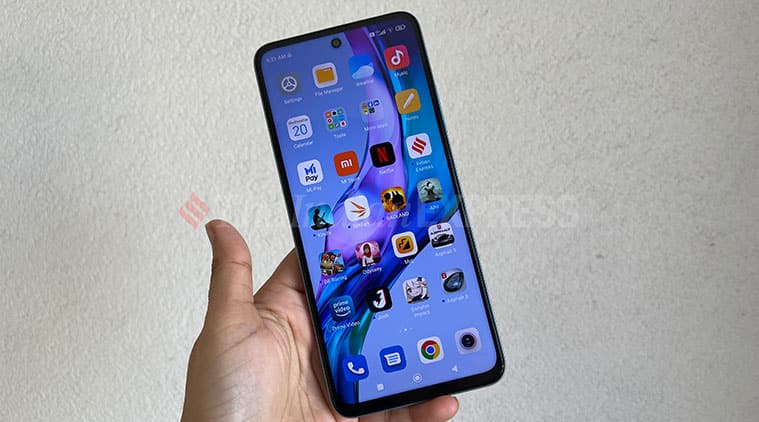 Redmi has packed this phone with a 5080 mAh battery. This is good enough to get you through a day’s worth of usage. During my daily usage, which involved taking pictures, playing games, and browsing on social media and Netflix on the phone, the battery went from 100 to around 25 per cent. The 67W charging will ensure you can get the battery back to at least 50 per cent in just 10 minutes (when at 20 per cent), which should be enough if you are in a rush.

The phone runs MIUI 13 based on Android 12. Redmi will give this phone two years of Android updates along with three years of security updates. As always, MIUI 13 has its pre-loaded bloatware, some of which you cannot uninstall, such as the Mi Pay, GetApps app, etc. I didn’t notice too many annoying notifications this time, but that’s because I’ve learnt to turn off many of these.

The Redmi K50i gets a headphone jack as well with HiRes Audio certification. So if you are one of those who still prefer good old wired headphones, this phone has you covered. The Redmi K50i gets a 64MP main camera at the back. (Image credit: Shruti Dhapola/Indian Express)

The rear camera setup on the Redmi K50i includes a 64MP+8MP+2MP setup. Now, the main rear camera is capable enough and can handle most shots well. Even in indoor lighting with night mode, the camera delivers good enough results with adequate details. The photos look sharp and details are preserved. But it is not all perfect. 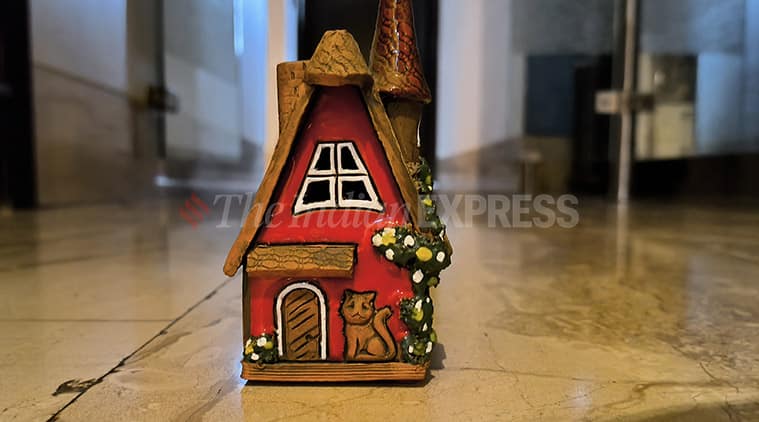 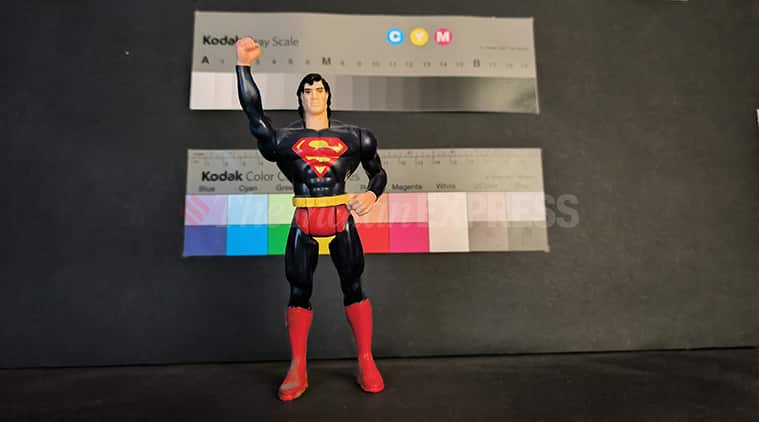 The display could certainly be brighter, especially when you use it outdoors.  The main camera struggles with skin tones and colours like pinks and reds. For instance, when I tried to click photos of a red flower on my terrace, I could see the results are not accurate at all. The colours are bleeding, the details are lost, and it’s not a great photo. Even indoors, when I took some photos of my son, the skin tones were a bit darker, and his red shirt was oversaturated. The camera does struggle to handle reds and pinks. For instance, in this photo, the colours are completely off. (Image credit: Shruti Dhapola/Indian Express)

The 16MP selfie camera is fine, and I used this with most beauty features turned off for my results. The ultra-wide camera leads to a noticeable drop in quality, and the macro remains as forgettable as ever.

I found the speakers and audio on the device underwhelming. When watching Netflix, I had to keep the volume levels cranked right up to hear each dialogue. I expected better in this series.

Redmi K50i has many expectations, and it will be compared to the Redmi K20 Pro. The truth is that it might not come close. But this is not to say it is a terrible phone. The performance is very good, especially compared to other options, there’s fast charging, the headphone jack for those who prefer this, and the display and battery are adequate. But the camera leaves you wanting. The design does not stand out either.

Still, since Xiaomi has priced this at Rs 25,999, it might have an edge over some rivals given the price. If you want a more gaming-oriented device or just a phone that performs smoothly but don’t want to pay Rs 30,000 or more, then this is one of the options to consider. But if you can pay more, Xiaomi’s own 11i Hypercharge or even the Poco F4 might be better more well-rounded picks.

Question: How Do I Download Windows 10 On My Tablet